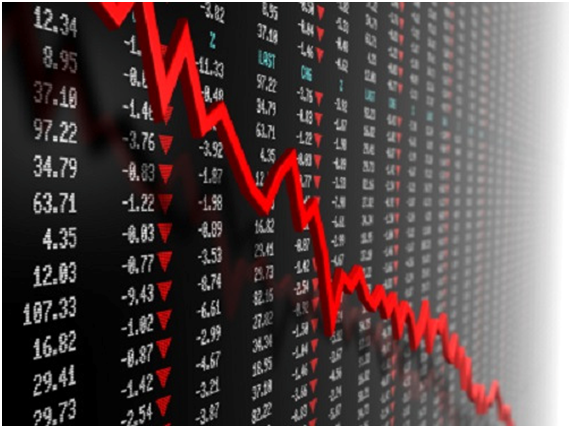 A stock market crash is a decline (often sudden) Of stock prices across a wide section of a stock market. It results mainly into a huge loss of paper wealth. Stock market crashes being social occurrences are mostly brought by some underlying economic factors.
The biggest stock market crash of the United States are; starting with the biggest in US  is the wall street crash of 1929 known as ‘Black Tuesday’, it began on October 24, 1929 and end up affecting other industrialized, developed economics. Others are the 1937-1938 recession, the Kennedy slide of 1962, the black Monday of 1987, the economic effects due to the September 11 attacks 2001 and the last biggest occurrence was the financial crisis of 2007 to 2008; termed the global financial crisis. It occurred due to exposure of securities of subprime loans and the credit default swaps issued to insure the loans and their issuers. The resulting effect was business closures, decline in Money supply, rise in unemployment, credit contraction and firing of workers.
Going to Russia, the biggest and notable stock market crash was in 1998, also called Ruble crisis or the Russian Flu. It occurs on the 17th of August of that year. The underlying causes were chronic fiscal deficit, decline in productivity and a high exchange rate between foreign and the local Russian currency.
Another big economy in Asia whom over the years also experience stock market crash is the people’s republic of China, the Chinese economy suffered its biggest slump in 20 years on the 24th of august although it started from the month of June. The Shanghai main share index cost 8.49% of its value. Billions of pounds were lost in the international stock market.
The above three economies responded each to financial crisis in a number of different ways. Starting with china, the government through its media outlets encouraged individuals to buy stocks, the China securities regulatory commission (SRC) Puts a loan on selling stocks by stockholders owning more than 5%, a six month loan. The government backed by the central bank, provided cash to brokers to buy shares.
The Russian federation on its part responded to the crises by infusing cash into the economy. A lot of enterprises paid their debts in back wages and tax. Goods demand by consumers rose to a very good level. Another major aid to the crisis at that time was the rapid rise in oil prices between 1999 and 2000.
The United States of America set three levels of thresholds each representing different levels of decline so as to check sharp price variations. And government had to intervene like after the collapse of  ‘Lehman brothers’ in 2008, a lot of banks failed (15 failed completely) while some were rescued by the state, others acquired by the state completely.
A lot of countries learnt lessons from the above big economies, and to cap it all, developing economies should curb their exuberance (spending) As they rise, financial markets need strong regulations to survive.
Share
Facebook
Twitter
Pinterest
WhatsApp
Previous article
WHY USA, CHINA AND RUSSIA ARE NOT POPULAR ON THE INTERNATIONAL CRICKET SCENE ?
Next article
Fastest way to get the Google adsense approval