Role of Guy Kawasaki behind Canva success as Chief Evangelist

“Macintosh democratized computers; Google democratized information; and eBay democratized commerce. In the same way, Canva democratizes design.” said Mr. Kawasaki. “You don’t get many chances to democratize an industry, so I seized the opportunity to work for Canva.” – Guy Kawasaki

Guy Kawasaki is the chief evangelist of Canva, a graphic-design online service and former chief evangelist of Apple. He has written over a dozen books, with prime focus on the practical and tactical ways to empower people. In 1984, Guy Kawasaki was one of the Apple employees responsible for marketing their Mac. He was an early adopter of social media for business as an innovative marketing specialist. He considers social media as a powerful tool that enables startups to start marketing themselves from the very first day for absolutely free, making the procedure for competing and gaining customers for new businesses, an easy and manageable approach. 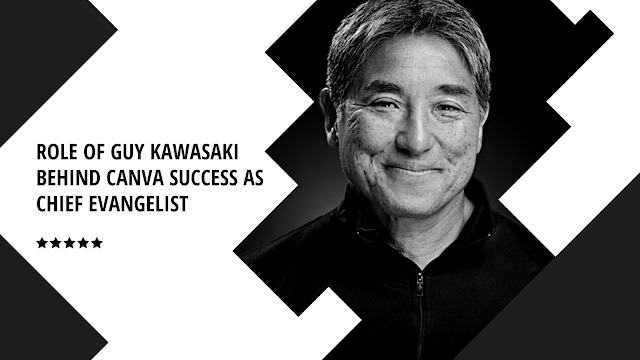 Canva welcomed Kawasaki as its chief evangelist when the site noticed Kawaski team’s active presence on the platform for graphic designs. They identified that the designs were created using their tool so they reached out to him and offered him this role which he accepted as he considered Canva an opportunity to democratize the design industry. Since then Guy has played a crucial role behind Canva’s success as Chief Evangelist. Let’s explore how!

Guy is not only a famous marketing guru, but also a serial author. He is an executive fellow at the Haas School of Business at UC Berkeley as well as a venture capitalist. The reason behind his immense fame is the fact that he popularized this concept of Evangelism Marketing. Evangelism can be considered the purest form of sales at the outset. In this culture you are part of creating a movement or inspiring people to jump onto the bandwagon. And yet, when you look at it from a product company’s lens or put that into a sales context it is more than just chasing sales quotas.

Guy Kawasaki has authored masterpieces like Wise Guy, The Art of the Start 2.0 and How to Drive Your Competition Crazy. He is a head on the subject of marketing at VC and entrepreneurship. He is also the founder of Guy Kawasaki’s Remarkable People Podcast and if you think that’s it then here you go: He’s also a brand ambassador for Mercedes-Benz as well as a trustee of the Wikimedia Foundation!

Now imagine, such a profile with such an influence supporting your brand!

In January 2014, Canva  opened publicly and had an audience base of 150,000 users at that time. In April 2014Guy Kawasaki joined the team as Canva’s Chief Evangelist and boom! Two months later: the company’s number of users tripled. Guy Kawasaki’s presence and support to Canva helped the online design platform double its users’ numbers within no time.

Melanie Perkins, the CEO of Canva expressed her gratitude while saying: “It’s an amazing endorsement of the Canva vision to have someone of his caliber join our team. We have become a daily tool for many bloggers, marketers and small business owners. It’s a testament to our team’s hard work that we’re seeing 100,000 designs created every week by more than 330,000 users,”

The Factor of Mentorship

With Guy Kawasaki on board, apart from the factor of influence advocacy, Canva also got access to his valuable Mentorship. Look, we all agree that Guy is definitely a pro when it comes to marketing. He has YEARS of experience to share and that is exactly what Canva benefitted from. Guy is a firm believer of Working for a Cause and when he noticed Canva’s goal aligning with his mission, he started working closely with the team to democratize the design community. His mentorship, ideas and guides helped Canva in scaling their product.

Guy’s golden touch is not whatever I touch turns to gold but whatever is gold, Guy touches…

Kawasaki is smart with his decisions. He started working with Canva when it was only two years old but since the platform truly understood its users’ needs Guy decided to enrich it with his experience. Guy himself describes his choices in life by the fact that he only takes opportunities where he can see the benefit which is not only limited to finances but to creating a difference as well!

What are your thoughts about this topic? We are interested to know!